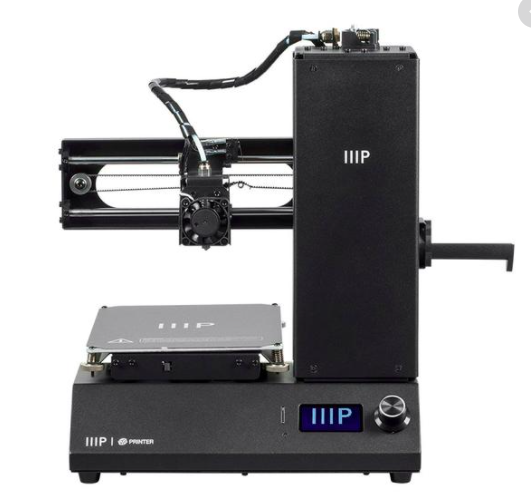 Back then in 2016, Monoprice released a line of mini 3D printers. They released their MP Monoprice Select Mini 3D printer line for $200. One that is included in the line is the Monoprice MP i3 3D Printer that costs $230. With such an affordable price, you should not be surprised when you find some problems with the device. However, this mini 3D printer is still worth it. It is a game-changing 3D printer. It also proved that 2016 is the year for entry-level consumers of 3D printers.

If you are interested in buying this mini 3D printer and need some considerations, here is the complete review of the machine.

A Glimpse of Monoprice MP i3 3D Printer

Considering the price, the features and print quality of this mini 3D printer are overall good. MP i3 3D is really similar to the popular, award-winning Monoprice MP Select Mini V2. If this is your very first time buying a 3D printer, MP i3 3D might be a good choice. The manufacturer optimizes this machine for printing with PLA open spools. Quite many users have used this mini 3D printer for printing a broad variety of models. It is surprising that the result is reliable considering the price.

Pros and Cons of MonoPrice i3 3D Printer

–        The hotend temperature is not consistent.

Not only simple to use, but Monoprice i3 3D printer is also easy to maintain. This mini 3D printer is capable of printing at 100 microns and has an E3D style Hotend. The results are not as smooth as those that more expensive 3D printers create. But this machine is an amazing learning instrument for those of you who want to start learning 3D printings. It is also great for testing and prototyping as well. Monoprice i3 3D printer has a 0.4 mm nozzle. The design of this mini 3D printer is compact and simple because the print head runs on rods with linear bearings.

As it is said before, Monoprice i3 3D printer works with standard PLA filament. The extruder is equipped with a fan that cools down the printer so that it reduces stringing and warping. This device prints with a 1.75 mm filament. You can also choose any PLA filament available on markets. Slightly different from Monoprice MP Select Mini Pro, the build area of this mini 3D printer from Monoprice is 4.7 inches x 5.3 inches x 3,9 inches, which is spacious enough for a wide variety of projects. Moreover, it also allows you to produce small-scale projects as well as experiments. This is why it is ideal for entry-level users.

Users can control the 3D printer via PC or the built-in LCD interface with a control knob. Users can also print 3D models from their PCs via a USB or SD card. Monoprice MP i3 3D printer works with ReplicatorG, Repetier-Host, Cura, and Simplify3D slicing software. It is possible for you to prepare your 3D models by using your desired program. This mini 3D printer driver is compatible with Windows, Mac, Linux, and OS X. Moreover, it also supports standard GCode files.

Monoprice i3 3D printer offers the highest print resolution of 100 microns that comes with a heated build plate. While the printing speed reaches 55 mm per second. Users can upload their files to the printer by using a microSD card slot or USB port. The manual mentions that the mini 3D printer is compatible with slicing software, such as Cura. This means that the device is able to parse standard GCode. It is not limited to proprietary software.

Similar to Monoprice Select Mini 2, the i3 3D printer does not need special filament. Instead, it can work well with any standard 1.75 mm spool of PLA or ABS thermoplastic. Considering the price, the 2 aspects of filament and software are totally rare. Other 3D printer manufacturers tend to use closed filament or closed software, which requires you to be in their operational ecosystem for a long time.

That is the review about the Monoprice i3 3D printer. The manufacturer has other worthy mini 3D printers in the line, such as Monoprice select mini v2 3d printer. Overall, the i3 3D printer is worth the price, though you might find some problems with it. So, are you interested in having a Monoprice MP i3 3D printer in your hand?

The Reasons You Should Choose the Monoprice Select Mini…