Apple on April 2020 launches its new inexpensive iPhone, the iPhone SE, which is a follow-up iPhone SE 2016 with the same name. Like its predecessor, the iPhone SE 2020 is the most affordable Apple iPhone, priced at $399.

Unlike the original SE iPhone, which resembles the iPhone 5, iPhone 2020 SE is identical to the iPhone 8 in terms of design. It has a 4.7-inch Retina HD LCD display with True Tone to match ambient lighting in the room, wide color, Dolby Vision, and HDR10. 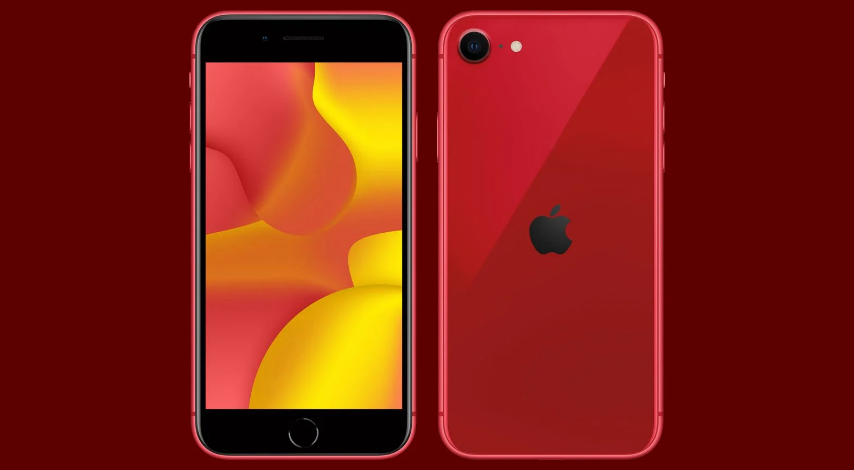 Available in black, white and (PRODUCT) RED, iPhone SE is built with front and back glass with color matching aluminium ribbon. Wireless charging is supported and the IP67 feature is waterproof and dust resistant so it will withstand splash and even short immersion in water.

Since iPhone SE is physically identical to the iPhone 8, it continues to display the top and bottom thick bezels. The top bezel accommodates a front-facing 7-megapixel camera and microphone while the bottom bezel includes a Home Touch ID button for fingerprint-based biometric authentication.

The new IPhone SE is the only iPhone in the current Apple lineup that continues to display Touch ID instead of Face ID. Like other Iphones, it uses the Haptic Touch for quick Actions and a contextual menu, with 3D Touch now eliminated from the iPhone lineup.

There are 12-megapixel single lens rear cameras on iPhone SE with an aperture of f/1.8, optical image stabilization, and support for portrait and portrait lighting modes. Night Mode isn’t supported, but there are smart HDR, wide color support, and more, plus True Tone LED flash with slow sync capabilities.

The iPhone SE camera can record 4K videos of up to 60 frames per second with optical image stabilization and support for slow-mo video and time-lapse video. The front-facing camera supports portrait Mode as well as using the image signal processor and the bionic Bionik nervous engine.

Inside, the iPhone SE is equipped with modern chip technology, featuring the same Bionic A13 chip as the iPhone 11, which Apple said is the fastest chip on the smartphone today. The A13 Bionic has a dedicated 8-core neural engine that can perform 5 trillion operations per second, two Machine Learning Accelerators on the CPU, and a Machine Learning Controller for better performance and efficiency.

Regarding battery life, iPhone SE lasts 13 hours of watching video, eight hours of video streaming, and 40 hours when listening to audio. It is able to charge fast and can charge up to 50 percent in 30 minutes when using a power adapter of 18W or higher

There are no U1 chips inside the iPhone SE, but the WiFi 6 support feature, which is the latest and fastest WiFi protocol, along with Bluetooth 5 and LTE Gigabit class with 2×2 MIMO. It also has NFC with reader mode and supports Express card (transit card) with power Reserve feature that allows the card to be accessed even when the battery is off.

How to buy
Pre-ordering for iPhone SE starts on Friday, April 17, at 5:00 A.M. Pacific time and the device will start arriving to the customer on Friday, April 24th. IPhone SE is launched in the United States and more than 40 countries and territories.

AppleCare + is available for iPhone SE for $79 per year or $3.99 per month, and Apple also offers a $149 upgrade package that also includes theft and loss.

Design
Although it is named after iPhone SE 2016 that shares its design with iPhone 5, iPhone SE 2020 is identical to iPhone 8. Features a 4.7-inch display with bold bezel at the top and bottom of the device.

The top Bezel comes with cutout for the front-facing camera, speaker, and sensor, and at the bottom of the device, there is a Home Touch ID button lined with sapphire crystals.

Like the iPhone 8, the iPhone SE has an all-glass body that uses a seven-layer ink process to add color to the glass, resulting in a rich color depth. The glass screen and glass body are united by the aluminum ribbon that matches the color of each iPhone for a smooth look, and there is a small antenna line.

The back of iPhone SE has a single-lens rear camera, microphone, and LED flash.

On the left side of iPhone SE, there is a mute button and a volume button, while the right side displays a sleep/wake button. The bottom holds the Lightning port and the speaker holes, and like the previous iPhone, there is no headphone jack so Bluetooth or Lightning headphones are required.

The iPhone SE size is 2020 at a height of 138, 4mm and a width of 67, 3mm, thickness of 7, 3mm, and weighs 5.22 ounces. This is the smallest of the Apple Iphones, but it is still much larger than the previous version of the iPhone SE. Because iPhone SE shares its design with iPhone 8, the casing designed for iPhone 7 and iPhone 8 will work with iPhone SE.

Waterproof and dust resistant
IPhone SE has a rated IP67 of dust and water resistance, which means it is fully dustproof and is able to withstand a meter of water (3.3 feet) up to 30 minutes.

IPhone SE will be resistant to splashes, rain, and unintentionally short water exposure, but intentional exposure to water should continue to be avoided. Apple warns that water and dust resistance is not a permanent condition and may be reduced as a result of normal wear, plus Apple’s warranty does not cover any kind of water damage.

The Touch ID Home button is covered with a durable sapphire crystal that protects the Touch ID sensor and the steel ring that detects the user’s fingerprint. Touch ID is used to unlock Your iPhone, fill in the password with iCloud Keychain, confirm Your App Store purchases, open a passcode-protected app, and confirm your Apple Pay transactions.

True tone
IPhone SE supports True Tone, a feature that has been included in iPad and iPhone models for several years now.

True Tone makes use of the ambient light sensor to detect lighting in a room, adjusting the temperature and color intensity to fit the light for a more natural viewing experience and such a paper that reduces eye strain.

Haptic Touch works similarly to 3D Touch and offers many of the same functions, but is not sensitive to pressure and does not support many functions for each press. Instead of being better described as long press or press and hold with haptic feedback.

Haptic Touch can be used across all operating systems such as 3D Touch and for many of the same tasks, such as accessing quick actions on the home screen, expanding notification options, previewing links in Safari, activating a flash on the lock screen, accessing additional features in control center, and much more.

IPhone SE comes with the same Bionic A13 chip included in the iPhone 11, 11 Pro, and 11 Pro Max, and that Apple calls the fastest chip ever in a smartphone.

It’s much faster than the A11 that is on iPhone 8, as well as more power-efficient, which increases the battery life.

There is an 8-core Neural engine on Chip A13, which delivers faster real-time photo and video analysis. A pair of Machine Learning Accelerators allow the CPU to run up to six times faster, generating more than 1 trillion operations per second.

Neural engines empower camera systems, face ID, augmented reality apps, and more, plus there’s a new machine learning controller to balance performance and efficiency. According to Apple, the A13 Bionic paired with iOS 13 allows new applications that use machine learning and Core ML.

Ram
Approaching when iPhone SE was released, rumors suggested it had 3GB of RAM, and the list of Chinese carriers has also listed 3GB RAM numbers.

Camera
To keep costs low, iPhone SE features a single-lens rear camera, but it adopts some technology from the iPhone 11 and 11 Pro, which means photos are better than possible with the iPhone 8.

This 12-megapixel wide-angle camera features an F/1.8 aperture with optical image stabilization, wide color capture, and next-generation Smart HDR for better highlighting and shadow detail. Apple said that it is the best single camera system ever on the iPhone.

It doesn’t have the same capabilities as iPhone 11 and 11 Pro do with some of their camera lenses, so there’s no support for night Mode or optical zoom.

Portrait and portrait Lighting modes
While there are no two cameras, the iPhone SE does not support portrait Mode, Portrait lighting, and depth control using the image signal processor and Neural engine for computer photography.

Portrait Mode allows background blur in images when taking portraits of a person, pet, or object, while portrait lighting allows for six studio-quality lighting effects to be added to the image.

Depth control allows the amount of blur in the image captured in portrait Mode to be set for a blurred blend and best detail.

Video Capabilities
The IPhone SE captures 4K videos of up to 60 frames per second, with 24 and 30 frames also available in addition to the 1080 and 720p shooting modes.

Extended dynamic range support is available for videos up to 30 frames per second, and optical image stabilization is available.

Front camera
This 7-megapixel front camera has an aperture of f/2.2 with Portrait mode and Depth Control support although there is no TrueDepth camera system. To enable this feature, Apple uses machine learning and a monoular depth estimate.

Fast Charging
IPhone SE 2020 supports fast charging, which means it can be charged up to 50 percent of battery life in just 30 minutes. Fast charging requires a USB-C power adapter that offers at least 18 watts, which includes Apple’s 29/30W adapter (priced at $49).

GPS and NFC
Support for GPS location services, GLONARAB, Galileo, and QZSS is included in the iPhone SE.

NFC with reader mode is included, and there is a background tag feature that allows the iPhone model to scan NFC tags without needing to open the app first. IPhone SE also supports Express cards with a power reserve, which means it can be used as a substitute for transit cards for public transport and will continue to function even if the battery dies.